Bob the builder is a fictional children's show character who helps the residents of Fixham with thier building and fixing needs. He is helped by his business partner Wendy, and has a (Blue) pet cat named Pilchard. He also has 7 vehicles who help him with his building skills. They are Scoop, a digger, Muck, a bulldozer, Dizzy, a cement mixer, Roley, a steamroller , Lofty the crane, Scrambler the ATV, and the newest arrival, Scratch the Excavator. He used to live in Sunflower Valley but later moved to Fixham where he still resides to this day. His friends include Farmer Pickles and his Tractor, Travis, Mr. Beasley and Spud, the mischevious, living scarecrow. 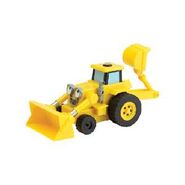 Battle vs. Postman Pat (by Wassboss)[]

Community content is available under CC-BY-SA unless otherwise noted.
Advertisement